Changing a window into french doors in Denver, Colorado

This historic home in the Baker Neighborhood of Denver, Colorado underwent a major renovation in 2007. The homeowners hired Mile High Window, Solar and Landscape Inc. for several parts of this project, including replacing some doors and windows, building a new front porch/deck, building a privacy fence in the rear of the property, building an historically accurate boundary fence in the front yard, installing an irrigation system and landscaping and much more. This blog entry will highlight one particular project, which was to replace a second story window with Pella French doors, which lead out to the new deck off the master bedroom (which we built with composite GeoDeck). First the window was removed and an expert mason was hired to remove bricks and reconfigure the opening for the new doors. Then, we framed around the opening in preparation for the new door installation. Finally we installed the doors and final exterior trim.

Learn more about replacement windows in Denver and the Colorado Front Range by visiting our services page. 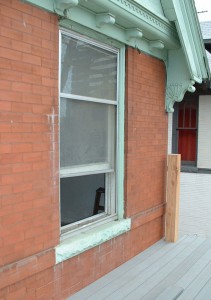 The original window before replacement 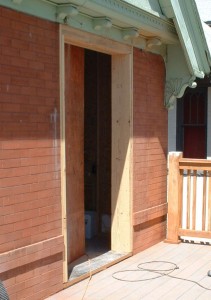 After removing the window and framing the new opening 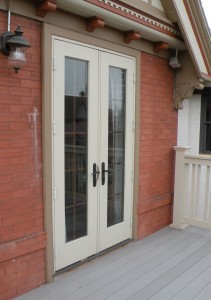 After installing and trimming the new Pella French Doors

Big thanks to Julia Timmer Photography for the beautiful photography on this website.

Send us a quick message below, or fill out our estimate request form.